A Reunion for the Old and Young 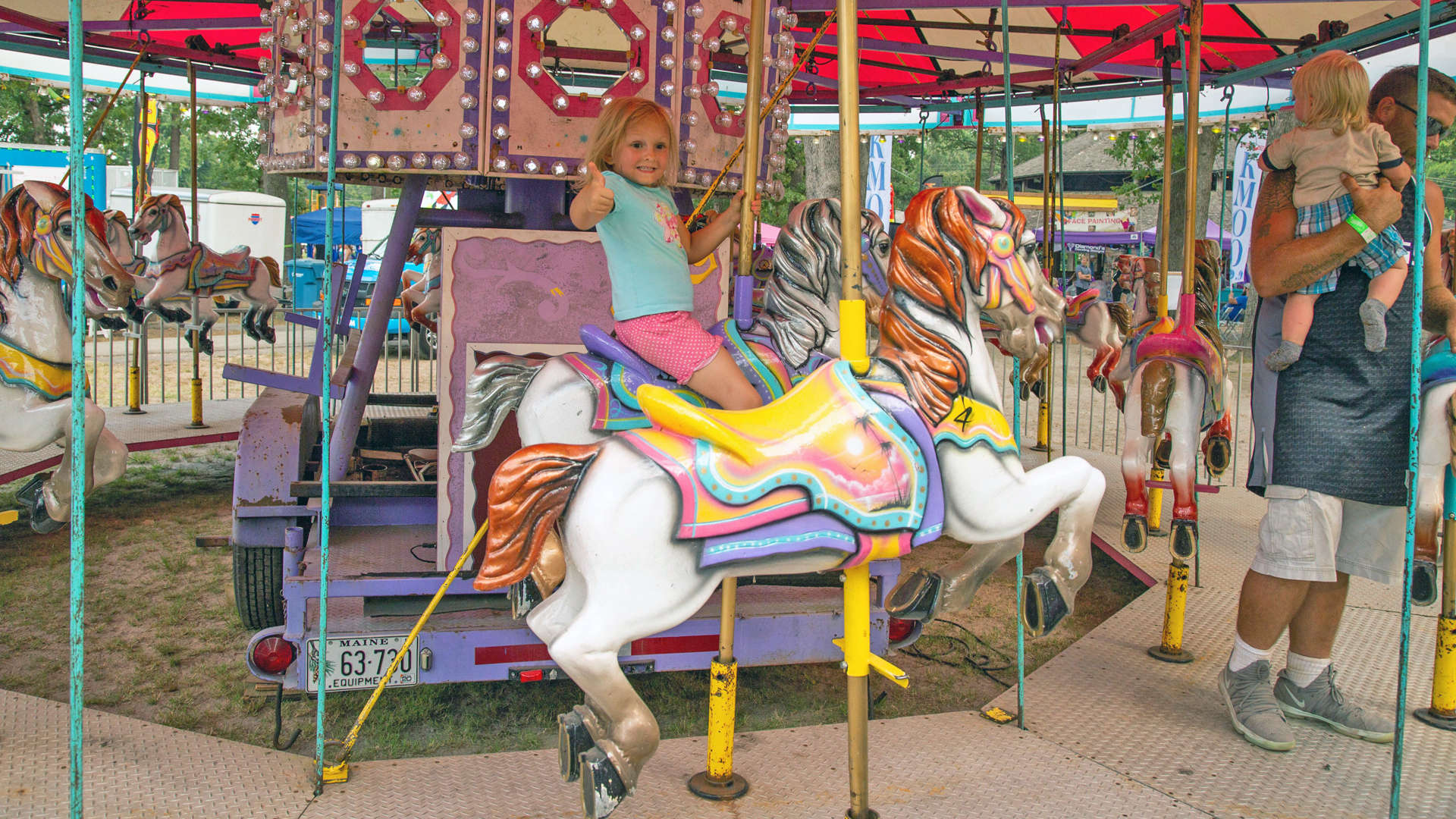 A Reunion for the Old and Young

Rocking country music plays in the background as twilight sets in. The flickering lights of a carousel shine out, softly lighting the area, as crickets and cicadas nestled in the surrounding trees set off the atmosphere to a perfect summery sweetness. Parents stand in small groups, talking, laughing, fanning, sipping, as children run around clutching hard-won prizes and sweet treats.

This idyllic scene is an annual treat for visitors and residents of Quitman in Wood County, Texas. With an average of a thousand people visiting this event on each of the three days it is held, the Old Settlers Reunion is a cherished tradition of community in Wood County and far beyond.

This amazing carnival and music expo has been a yearly event since its inception in 1899. In the first years, the reunion consisted of buggies and wagons circling up into camping groups. With all kinds of events, games, and community meetings taking place over the week-long event it used to be, the time to “talk to folks and have entertainment” must have been the highlight of the season.

Over the years, the reunion continued to grow and expand. Though not part of the lineup anymore, one of the most popular events that grew out of the change was the infamous fiddling contest. From the 1960s until many years later, this contest was so immensely popular that hundreds of people would travel from all across the country to try their luck. With fiddlers bringing families and friends alike to help cheer them on as they competed for prizes, this contest was, to many visitors, the climax of the reunion. However, with the rise of digital technology, the art of fiddling unfortunately fell into somewhat obscurity, and in the mid-2000s, the board of the Old Settlers Reunion moved on to the next generation of greatness for the event.

Nowadays, the Old Settlers Reunion is still as fun and important in the community as it was more than 120 years ago. In 2022, the event will run from Thursday, August 4 until Saturday, August 6. In addition to plentiful food, craft, and other vendors and carnival-type games, the reunion is also fully organized to include some prestigious local talent performing all sorts of genres. Each of these shows is, amazingly, completely free for the public to attend.

The musical portion of the reunion will start strong on Thursday night with the “rocking and rolling” of some good old tunes from “The C,” Mr. Dale Cummings. Cummings, who has sung with multiple musical stars such as The Bellamy Brothers, Shenandoah, and Buddy Holly’s Crickets, sings and dances to music from the 50s, 60s, and 70s. This popular show is slated to be a blast for all!

Friday night brings the arrival of Rafael Espinoza and the Rockabilly Railroad; this band plays “original music that is deeply rooted in the blues.” Espinoza recently participated in an opening performance for Willie Nelson, recorded an album along with his band in the legendary Sun Studio in Memphis, Tennessee (which is the same amazing studio where Elvis, Johnny Cash, Jerry Lee Lewis, and other famous stars recorded some of their earliest albums), and won The Heart of Texas Blues Challenge. With exceptional talent like this, the Rockabilly Railroad is a sound that visitors are not going to want to miss.

Saturday night will actually feature a two-part event, the first half of which is the brand-new “Meet the Bulldogs” night. Only having been done once before, the idea of this fun event is to give the community a chance to meet and encourage the athletics department before they “kick off” the new high school football season just a few weeks later. From the cheerleaders to the band to the athletes and coaches all being included, the pep rally feel of the “Meet the Bulldogs Night” will be an exciting beginning to Quitman’s football season.

Finally, the event wraps up Saturday night with a unique and wholesome music phenomenon: Landry & Company, a Texas-based, four-person, multiple-genre family band. The band is made up of Landry and Dorothy Wilkinson, who are a husband and wife duo, Landry’s brother Cardis, and his father Steve. Landry & Company’s feel-good story and upbeat, original music are sure to be a perfect way to end the amazing event!

The itinerary for the Old Settlers Reunion also includes tours of the historic and beautiful Honeymoon Cottage at Jim Hogg City Park. Ms. Linda Haddock from the local Daughters of the American Revolution will be giving tours of this iconic, original Southern home from 6:30-8:00 pm on both Thursday and Saturday nights.

Even more than the other events, today the undisputed highlight of the Old Settlers Reunion is the idyllic, the nostalgic, the can’t-have-summer-without-it treat—the carnival. Held in the parking lot of Jim Hogg City Park, the carnival has long been a feature which people travel to come be a part of—and for good reason! While in the past, visitors had to pay a small fee to get into the fair and then also to ride rides, in 2022 the entry fee has graciously been offset by three generous local sponsors (the First National Bank of East Texas, UT Health, and Wood County Electric Cooperative, Inc.).

The fun is just beginning when the heathery evening of Wood County’s infamous “Piney Woods” sets in, as the rides, games, music, and more will be open from 6:00 until 9:00 every evening. Now only costing visitors a total of one dollar per ticket (or, since rides have varying amounts of tickets needed, an armband with free riding all night is only $25), fun carnival rides straight out of childhood memories will be present!

And as if the Old Settlers Reunion weren’t amazing enough with all this and so much more lined up, it’s all for a good cause, too. While other events can be for-profit and unfortunately simply too expensive for many, the profits that the carnival accrues never touch the organizers. In fact, to the contrary, every penny made from the Old Settlers Reunion (minus the cost to put it on) is funneled straight back into the community.

“The Wood County Old Settlers Board (is) nonprofit. The goal of this event is not to create windfall profits; rather, the purpose is to allow other worthy organizations to raise funds,” says Rocky Bridges, the President of the Board of Directors for the Old Settlers Reunion. “We’re there to provide (this event) to the community. Any financial gains that are realized by the board are funneled right back into the community.”

While most of the money goes into paying for the event itself—ensuring that attendees are not burdened with a heavier cost themselves—the remaining funds are made into several scholarships which the board gives out to graduating seniors from Quitman High School. These scholarships, whose amounts vary according to the changing profits made every year, have made differences in the lives of many students.

In exceptionally profitable years, any money left over after scholarship disbursements has been put towards other organizations or needs in the community: for instance, one year, picnic tables, chairs, and covers were funded by the carnival for the local swimming pool. Another year, the fire department was given needed equipment. And in 2022, the board is hoping to set aside more funds to save the pavilion in the center of the park. The pavilion, which was built by the same settlers who founded the Old Settlers Reunion, “needs major repair and major rebuild,” according to Bridges. “We’re still relying on donations to get that.”

The Old Settlers Reunion of today doesn’t always look the same as it did the year before. Yet, with each additional celebration, the event seems to grow bigger, better, and even more entertaining! With tons of rides, games, food vendors, concerts, and other experiences lined up, the Old Settlers Reunion of 2022 is bound to be a great success and a fun time for all. And if you can have fun and help contribute to your community’s needs at the same time, why stay home? Go out and have a relaxing, fun-filled evening with family and friends!