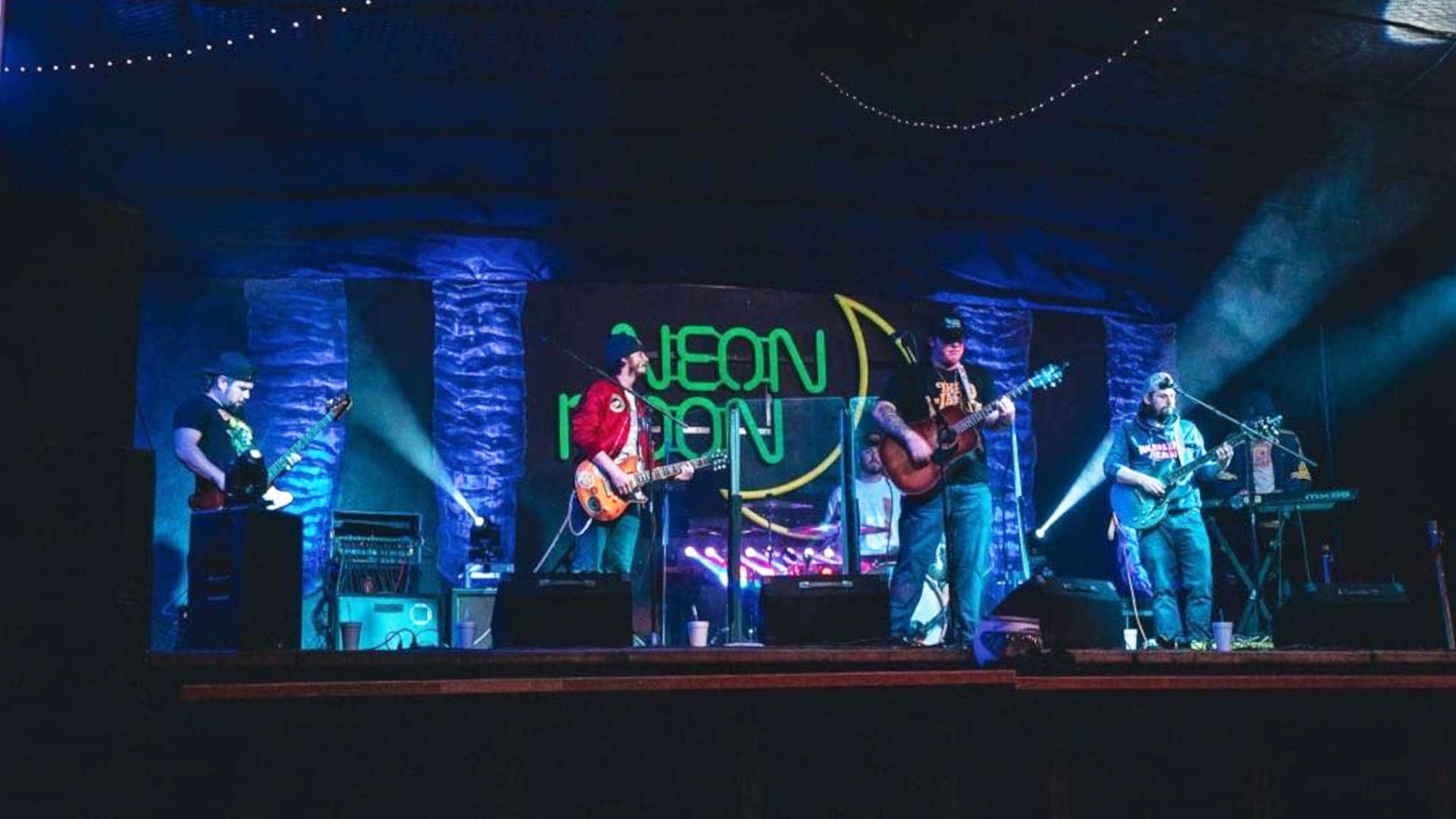 15,000 people scream and chant his name as a young figure saunters up on stage in a ball cap and jeans. He doesn’t make eye contact with the crowd, but unconcernedly going about his business, plugs in his electric guitar and strums a few practice chords. Finally, the figure turns to the mic and lifts his eyes to the crowd with a cockeyed grin.

“Hey there, Area 6. Where you at?” Cheers drown out his next words, as they do the beginning of his first song.

This seemingly already famous figure is none other than Wood County’s own Bobby Irwin—a 19-year-old singer-songwriter from Quitman, Texas and front man for the Bobby Irwin Band. The place is the 2021 National FFA Convention & Expo, which features a competition where talented individuals from across the nation compete against one another for first prize—a prize which our Wood County singer took home!

The up-and-comer, whose main genre is that of “Rockin’ East Texas Country” (a mix of country and rock which Irwin named himself and which is quickly gaining popularity among music fans of all ages), has always had something that very few have: A knowledge of his career field from the very beginning.

Specifically, Irwin says that he always knew he wanted to be a singer, even from the time he was five or six years old. His time in music began with his grandfather, Joe Jones, who throughout his childhood gifted Irwin with a guitar and with Jones’ music lessons, encouragement, and—most importantly—with his love for music. Irwin’s fascination with music never waned; never would a stranger hear little Bobby say that he wanted to be a fireman, police officer, or astronaut: “[It was] music,” he says without missing a beat. “Always.”

Irwin’s career in music began at a very early age. Regarding his earliest wins, he jokes, “In the 5th grade, I won the talent show… from there on, I… won the 6th and 8th grade talent show[s], and then… (pause) there [weren’t] any more talent shows!” It was also in the 8th grade that Irwin’s professional career took off. At this time, he began playing several shows, including a gig for First Monday Trade Days in Canton, where he sold CDs that he and his newly-formed band had recorded.

While it can be hard to imagine a time when Irwin—who nowadays spends the majority of his days in various music-related activities—was not as interested in singing, there was a time when it was just a little boy and his grandfather playing the guitar. However, it was when his grandfather, the inspiration for Irwin’s music, tragically passed away in 2016 that Irwin really felt a “kickstart” to his musical career: “That was when I was like, ‘I really want to do this…’ and that’s when it all kind of kicked in.” Irwin then began to apply himself to his chosen career field even more heavily, even admitting that he neglected his academic studies to some degree in order to attain what he knew was the final goal. “I really wasn’t worried about [school], because… in my mind… I knew that when I was done [with school], this is what I was going to do.”

By his junior and senior years of high school, Irwin notes, his career was already booming. Within a few years, he had gone from relative unknown to opening for such gigs as Blacktop Mojo, Zane Williams, and Curtis Grimes & The Steel Woods, among others. While Irwin definitely remembers his early days in music, where in order to secure a gig it took “phone calls after phone calls, and emails that somebody’s probably never gonna see,” he says that in his career now “it’s… gotten to where they [hosts] contact us.” These days, Irwin’s career is noticeably going places: He has already released five singles (available on most major music platforms), and he has more on the way as he writes, records, and formats these songs in between playing major shows across the state. Regarding how he finds the motivation to do all of this (often exhausting) work, Irwin says that it’s important to “just keep on trying.” He continues, “That’s how it works… you just… keep pushing yourself and keep trying to get in touch with these people.”

While other aspiring stars are in their career of choice for the money, fame, or applause, Irwin’s favorite part of his singing career is more heartfelt and attention-grabbing. For him, it’s all about being able to step up on stage, take the chaos of life and the thousand thoughts of a hundred people in the room, and make everyone just sit and listen. It’s about being able to make people move away from their busy lives for just a moment and simply feel—really feel and really listen in a way that not everyone is capable of doing anymore—what he’s trying to communicate through song.

To illustrate that point, Irwin notes a recent time when he was out with a group of purple heart veterans on a hunting party. At one particular point, the veterans were all talking and doing various activities, when Irwin started to sing his newest song, “Jamie.” The song, a powerful piece reminiscent of the music of the biggest country stars, was written about one of Irwin’s friends whose mother had died of cancer. Irwin’s heartbroken chorus of “I just wish you were here” is soul-penetrating enough to draw tears from the hardest eye, and that’s what it did. As soon as Irwin began his song, the group of veterans immediately hushed and every ear stopped to listen. “You could just hear a pin drop,” Irwin says of the moment. “These guys [were] just sitting there that are way bigger than what I’ll ever be, and just like getting their attention and feeling their emotions to that song is just… crazy.”E

Irwin’s goals for his career are as noteworthy as his career itself. Interestingly, this rising East Texas star doesn’t want to be remembered for the things that many aspiring artists do—neither his money, fame, nor holdings. “[I want to be remembered as] a respectful guy! That’s my biggest thing, is respect.” This statement, which fittingly is something most people can really respect, makes Irwin stand out even further from the crowd. “We run into a lot of people that I’ve grown up… listening to, like ‘I want to be just like those guys, those guys are amazing,’ and then I meet them, and they’re just like… terrible people… I just want all these guys that are coming into [singing], like me, to be respected and treated [well].”

Irwin continued, “I want to be known as the one [that makes people say] ‘I wanna open up for Bobby Irwin, or go hang out with him, ‘cause he’s a cool guy. He’s nice, he’s not gonna treat us wrong.” These words really stand on their own. As Irwin makes respect and kindness his co-priorities along with his music, it seems fairly obvious that those who can say they know Bobby Irwin today are going to be able to boast about that same fact well into the future.

Irwin’s music is available on most major music platforms. For more information, please visit his website or his Facebook page.