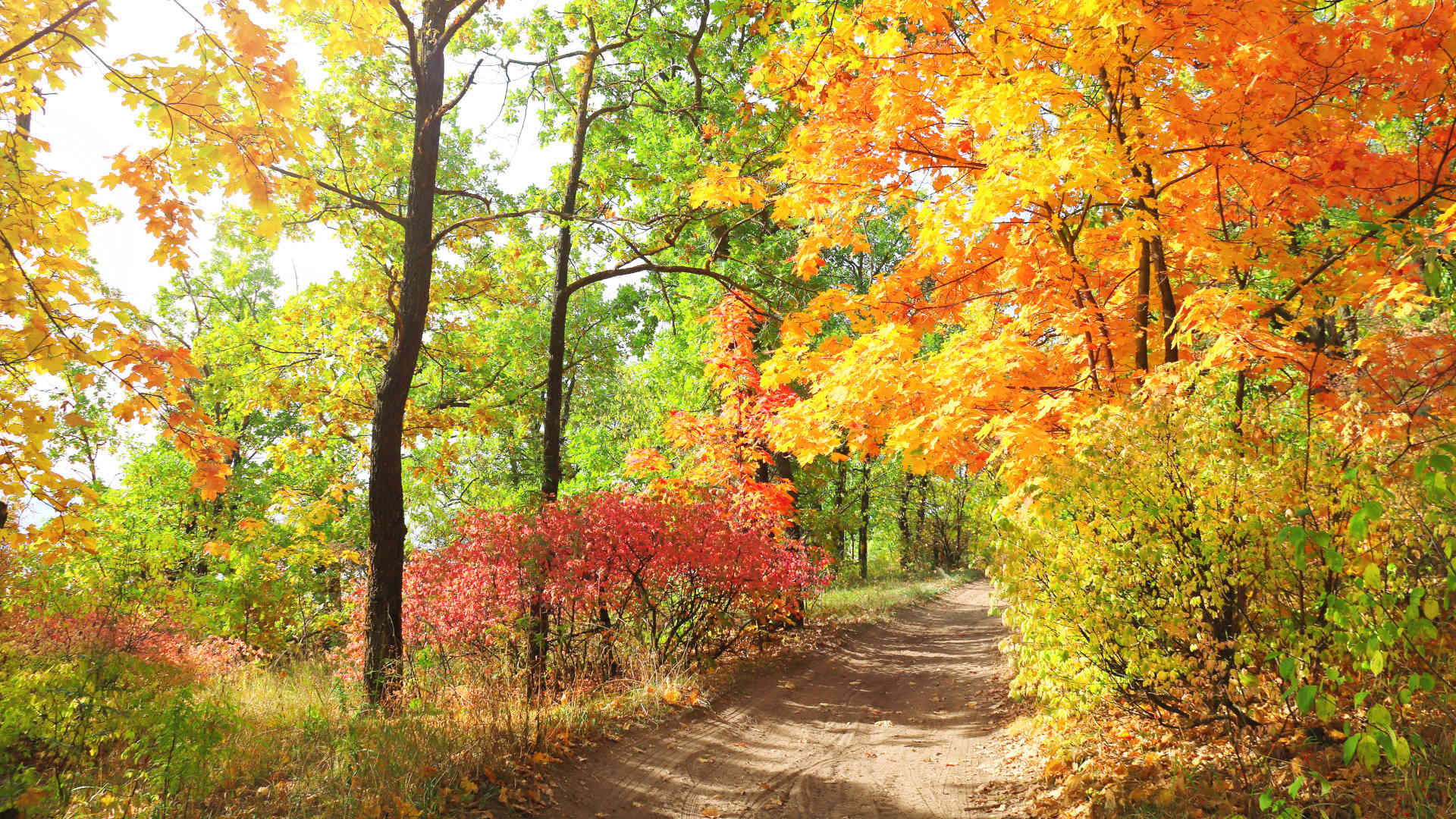 Once upon a time, a group of East Texans decided to have some fun.

They wanted to enjoy what Howard Rosser, a Winnsboro native and pioneer of Autumn Trails’ driving tour, would later describe as extraordinary beauty.

“Between the Greenness of summer and the nothingness of early winter, the first sprinkling of frost touches the sweet gums, maples, great red oaks and sassafras of the Tri-County, and the countryside becomes a Scotch plaid,” Rosser wrote.

And so they enjoyed it together.

Meeting up outside of Winnsboro’s Cater Hill in the fall of 1957, the friends rode around the countryside together, laughing, talking, reminiscing and sightseeing.

This original group of friends so enjoyed their Sunday afternoon jaunt through the country roads that the following year they decided to do it again under the official name of their newly-formed “Autumn Trails Association.”

Suddenly, less than 20 years after the first gathering in 1957, Winnsboro’s Autumn “Trail Ride” was one of the most popular events in the area. Attracting almost 1,200 participants for a single weekend of riding, camping, sightseeing and re-enacting, this event was growing like no one could have expected.

And, adding to the fun of the trail ride, other events began to throw their hat into the ring. Suddenly Autumn Trails was a blow-out event with specialized activities for every kind of person.

And today is much the same – except even bigger and better.

Today, the Autumn Trails tradition has grown so huge that it can no longer be held on one weekend. In fact, the multitude of fun events and celebrations encompass part of September as well as much of October!

Every weekend is something new for Winnsboro’s Autumn Trails. The first weekend is the Little Miss Autumn Pageant, where “Tiny Miss,” “Little Miss,” “Junior Miss” and “Autumn Princess” contestants gather for the pageant. Then, just one week later, junior high and high school girls compete for the title of “Queen Autumn Trails.” This prestigious pageant, which is based in early Autumn Trails history, uses Miss America rules and regulations and is only awarded after extensive interviews and competition.

The third weekend in October is one of the focal points of the Autumn Trails event: the trail ride and welcome parade.

Today, thousands of people come to participate in Winnsboro’s large-scale trail ride traditions. In fact, “large” doesn’t even quite describe the event: The city’s trail ride weekend actually holds the record for being the two largest trail rides in the entire state of Texas. In fact, up to 12,500 people have attended this event at one time. While attendance has calmed down a bit in the last few decades, Autumn Trails’ record as the largest trail ride in the state remains unbroken to this day.

Before the trail ride itself begins, hundreds of tents, campfires, horses, mules and covered wagons line up in Winnsboro’s city park to mark off their camping spots for the weekend.

Starting at 4 o’clock on Friday, however, the action begins. Participants of the Trail Ride Welcome Parade start at the Winnsboro water tower and loop around downtown on their horses, wagons, or on foot.

After the giant downtown parade, which is chock-full of candy-throwing, marching and cheering, the Winnsboro Rodeo Association hosts a chili and stew cook-off to feed not only the hungry paraders and campers but also any local community members who want to join.

The next day at 10 am marks the official beginning of the trail ride. With a gorgeous 18-mile trail hugging the edge of sparkling Lake Winnsboro, riders set off on a several-hour jaunt through the rolling hills of Winnsboro’s countryside.

And the fun isn’t over once riders return to the city center in Winnsboro. After being on their horses or mules all day, participants (and, of course, any visitors looking to have a hilarious evening of fun) get to watch a “Mule Rodeo.”

Imagine trying to get a donkey to do barrel racing on command, and you’ll have the tear-inducing hilarity of mule rodeos.

Adding to the fun, the rodeo also includes “monkey in a tree--” a sport where riders have to convince their stubborn mules to approach a hanging rope and to get close enough to pick someone off of. Hay rides, balloon popping, and more are also present at this family fun night.

In addition to the trail ride and all of its associated events, the third weekend in October also features “Jeeptober in the Boro,” a tricked-out Jeep rally where, among other categories, the dirtiest, most vintage, most modified or best costumed Jeeps get trophies and raffle prizes.

Not to be outdone by the trail ride, Winnsboro’s Autumn Trails festival is also known for its humongous antique car rally.

Yes, you guessed it – just like the trail ride, Winnsboro Autumn Trails’ antique car rally has also held a record for being the biggest of its kind in the state of Texas.

At 10 am on Saturday the 22nd, three hundred cars – roughly half of them classic Model A Fords – line up two miles outside of town waiting for the parade to begin. The parade quickly proceeds to Main Street and the downtown area where, honking, laughing, passing out candy and generally making a noisy good time for all, the cars roll by.

After the parade, cars can either leave or can loop back around and park on Main Street, where a classic car show is held for an hour or more. Finally, the Autumn Trails Association puts on a barbecue and banquet for the classic Model A car owners, who, before leaving the following morning, will set out on a lazy Sunday morning drive through the country.

The tradition of holding a Model A car parade started in an obnoxiously comical way. In October of 1963, two Winnsboro natives (Robert “Uncle Bob” Willis and J.B. Vaughn) took their Model A’s, decorated them with Dustbowl-era themes and painted “Winnsboro or Bust” on the side, then barreled around town honking and waving at people.

“Imagine if you will, shopping the sidewalk sales of downtown Winnsboro in October 1963, and you hear the sounds of an ‘aoogah’ horn, and see two old Model A Fords round the corner and barrel down Main Street,” says the Autumn Trails brochure.

Uncle Bob’s brother John told him he was embarrassing, even if onlookers were having as much fun as the owners themselves were.

That is, until John himself got a Model A and joined in on the party.

Soon the group of small friends started inviting other Model A-owning friends to join them. Then the group size doubled; soon Dallas Model A owners were coming to have fun, too. Just a few years after that, Model A owners were traveling from out of state to come participate, and sometime in the ‘60s the car parade was opened up to all antique, vintage and classic cars. In its heyday, over 600 cars made an appearance at this still-huge parade of classics.

It's traditions such as these that have made Winnsboro the family-oriented, beautiful and fascinating place it is today.

The beard and mustache contest. Winnsboro’s famous farmer’s market. A “42” tournament. A cake and pie baking contest. Trade Days and a swap meet. Another chili cookoff. An arts and crafts show. The pet contest.The 52nd annual Jack Cross memorial livestock show. With good times, laughter and community traditions attached to each one of these – and prizes for most of them – Winnsboro’s Autumn Trails festival is so chock-full of activities that it might just take a lifetime to explain them all. Why not go try them yourself and see just how wonderful they are?